Once upon a time, there are two kannon1 statues made of stone in a village called Nokomura2.
The one is called “Otoko Kannon Sama3 (hereinafter Mr.Kannon)” and the other is called “Onna Kannon Sama4 (hereinafter Ms.Kannon).” Both of them are familiar to villagers
and there is a custom on a festival day which male in a village pray to Mr.Kannon; on the other hand, female pray to Ms,Kannon.
Thus two of Kannon always have watched over all of them since they were little.
In the village, there is a man named Heisuke and is a woman named Koyo.
Heisuke is a hard-worker, but he is easygoing so he and his wife could not keep going well and had divorced.
As for Koyo, she is very competitive so she could not become familiar with her husband and a new family. Because of it, she was forced to divorce and her husband sent her back to the home.
One day, some villager said “hey, Heisuke, you didn’t pray to Mr.Kannon when you married your ex-wife, did you?” and Heisuke said “Oh my god, I totally forgot. I should go praying to Mr.Kannon.” He noticed his mistake and he have kept praying everyday from the day.
Meanwhile, same as Heisuke, Koyo could not pray to Ms.Kannon because Koyo’s parents decided her marriage suddenly, so there is no time to consider for Koyo. However, she tried to keep praying everyday after she was back.

After a time, there is a party on a festival day and when everyone enjoys the party, a man said “Heisuke, I’ve heard there is a lady named Koyo on the skirts of the village. She is so nagging and had divorced once, but I guess you guys will be a good couple because you are so easygoing.” At the same time, Koyo also have heard about Heisuke from a village woman at the party. The villagers try to arrange a meeting between Heisuke and Koyo, but they were hesitating.
Then Heisuke intend praying to Mr.Kannon. He pray sincerely and ask “Mr.Kannon, Mr.Kannon, Please let me know about Koyo. Everyone says Koyo is so nagging and I have no idea she’s going to go out with me or not…” Just then, someone whisper to Heisuke “just go and ask Ms.Kannon.” He is so surprised, but he thinks it might be Mr.Kannon and he decided to go praying to Ms.Kannon.

Heisuke pray to Ms.Kannon on his knees and ask her “I came here because Mr.Kannon said so and I really want to know Koyo is good for me or not.” Thus someone tell him “Koyo is an amazing wife and she’ll be your one and only if you can listen to her. ”He feels relieved and when he tries to go back to Mr.Kannon, he heard a voice again. “Please place flowers in front of him because he loves beautiful flowers.” Therefore he put some flowers as Ms.Kannon said and pray Mr.Kannon again.

On the other hand, Koyo tries praying to Ms.Kannon after a while. Same as Heisuke, Koyo heard man’s voice. “If you want to know about him, you should ask Mr.kannon.” After she pray to Mr.Kannon, he told her “Heisuke will be a good husband if you would consider and also respect him. By the way, Ms.Kannon likes flowers, would you please take some flowers to her?” As Heisuke do, she brings flowers for Ms.Kannon.” After placing flowers, Ms.Kannon looks like she’s smiling at Koyo gently.
After a while, Heisuke met Koyo and they have fallen in love. They always support each other, and they become a top of villagers before they knew it. Needless to say, they lived wealthy life and happily ever after.
Since then people who had listened to that story always pray with flowers for a good match or finding soul mate. The story of Mr.Kannon and Ms.Kannon put someone together even though they have divorced spread to outside of the village, and many people keep visiting. Therefore, it becomes a village’s custom that praying to Kannon of the same sex and then pray to another Kannon with flowers.

Two Kannons surrounded by many flowers always smile and keep watching over everyone’s happiness.
Fin.
—————————————————————————–
Have you ever heard there is enshrined LOVE kannon in the islandpark?
Actually, the number of prayers is getting increased and small shrine become more popular for visitors. There is a small shrine in the square next to the café called “Yumeji5” and most visitors pray to it, but there is another Kannon next to the shop “Omoide-ya6.”
Both of them are smiling with holding flowers and the former Kannon looks like Ms.Kannon and the latter one may be Mr.Kannon. Moreover, they always have flowers which is given by prayer everyday.

Nowadays young women and couples tend to pray for the success of love when they visit, but actually, it’s more effective for wonderful remarriage or getting back to ex-lover, so people of all ages tend to come islandpark to make their wish come true.

If you come to the islandpark and want to pray for your love, you’d better to take some flowers to Mr. and Ms.Kannon, or they may help your love and also make you happy.

1)kannon is the goddess of mercy
2)Mura means village in Japanese
3)Otoko means male, and Sama is the politely way of calling someone
4)Onna means female
5)yumeji means dream. They serve tasty sweets and drinks for making you feel so relax.
6)omoide means memory and ya means kind of the shop. They’re selling some stuff that recall your precious memory. 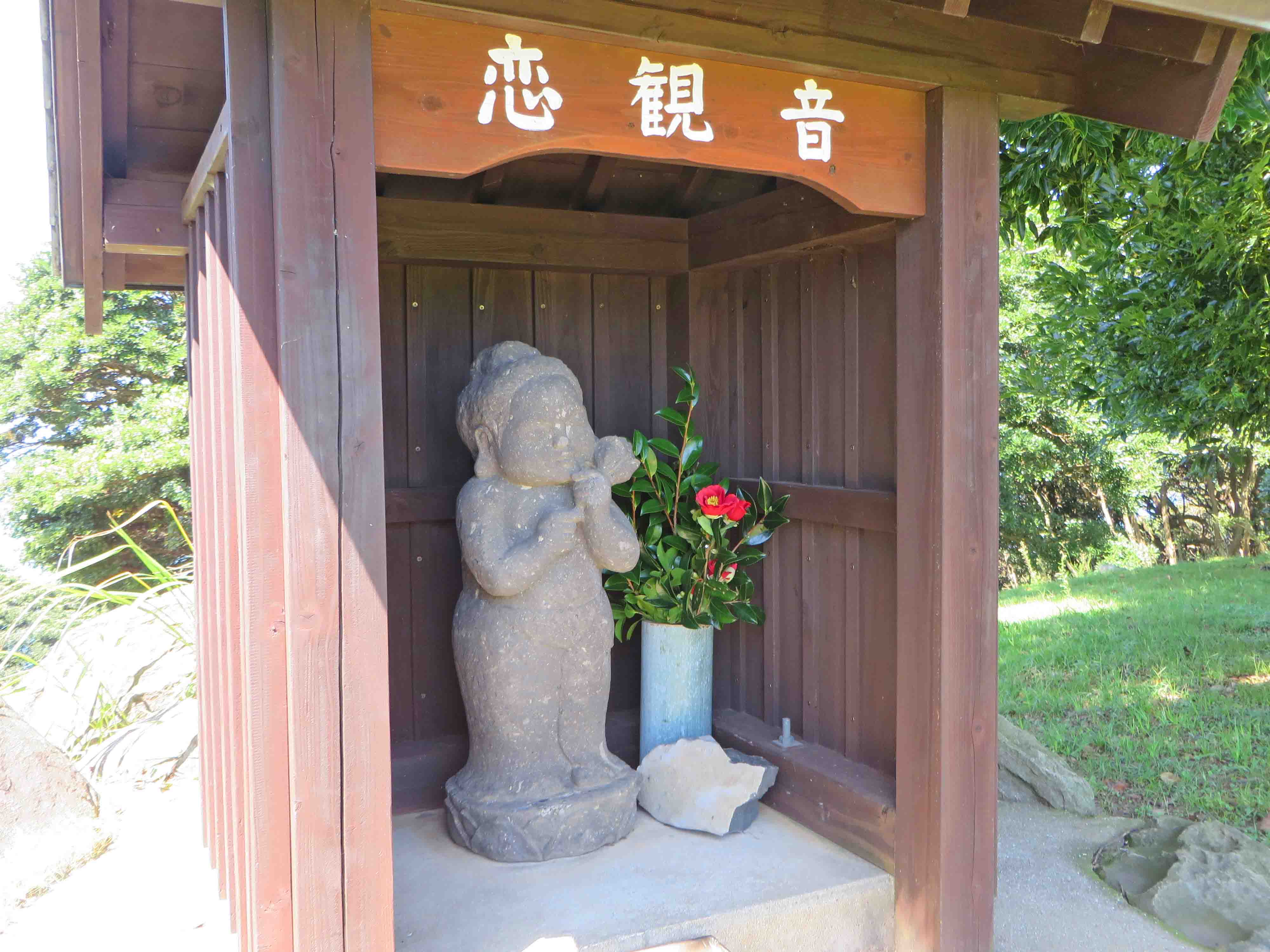