Nokonoshima Island Park began with the dream of one young man.

When he was 19 years old, Kosaku Kubota, the founder of Island Park, gave up farming on Nokonoshima, deciding that he cannot compete with the low-cost, high-output production of the city. He had invested much in his dream, but he chose a different path to follow it.

He thought that from that time on, concrete buildings will rise in the city one after another, and people who work there will seek nature to bring rest to their weary minds. Nokonoshima is not far from downtown Fukuoka. Thus Mr. Kosaku started to develop a park on the island, taking advantage of its scenery, and through trial and error started building Island Park from scratch. 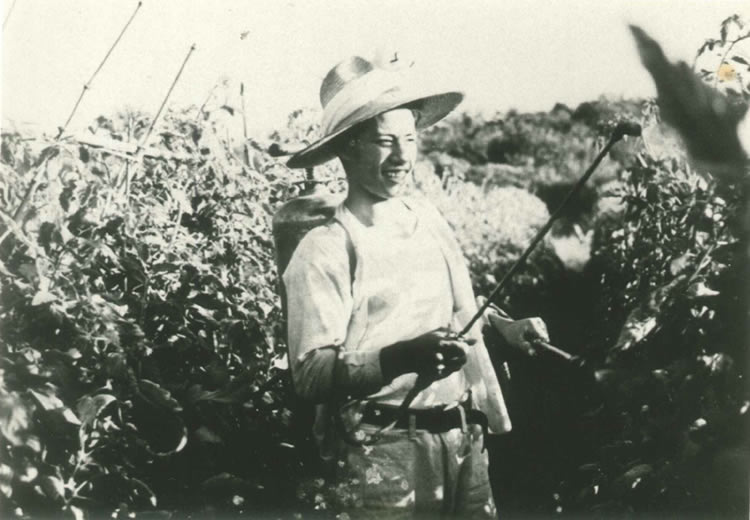 A park that makes full use of the natural environment – what needs to be done to make it a reality?
In order to create a park that would best utilize the wonderful views and terrain features, an expert was hired to draw up a plan.

Then, on the land that only sweet potatoes used to occupy, rhododendrons, lawn grass and other plants were grown by hand. On the 2nd of April 1969, the 44th year of the Showa Period, Nokonoshima Island Park was opened to the public. 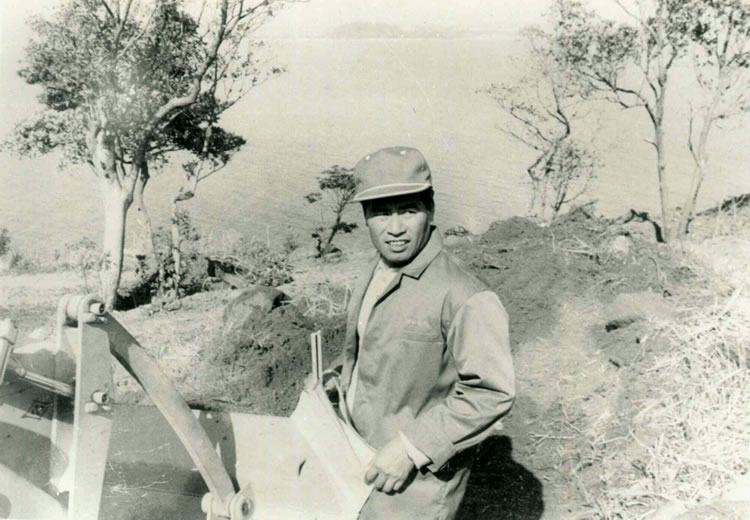 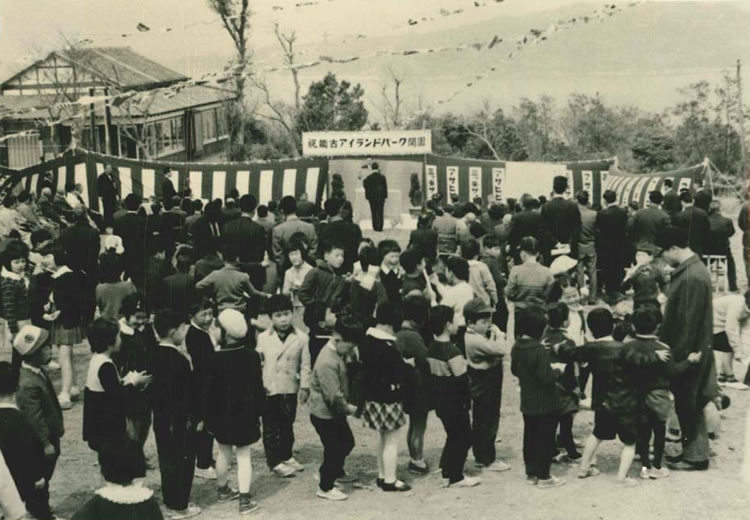 Many guests arrived on opening day. 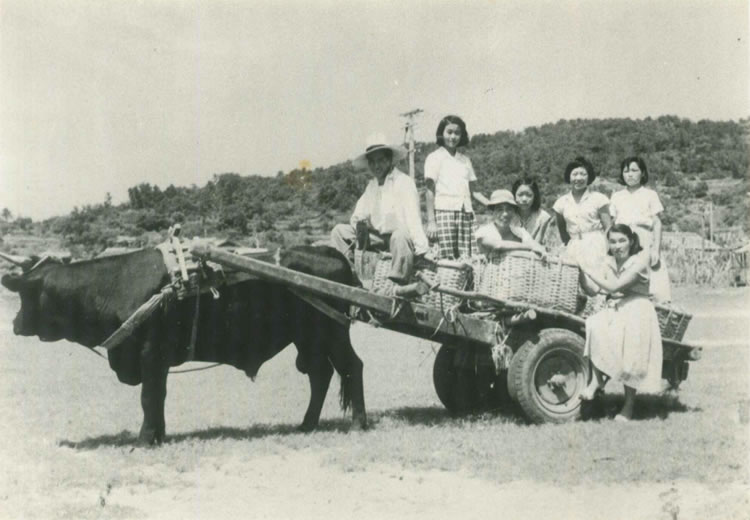 In an age with no cars, cows were used for transport.

No roller coasters or other amusement rides! The vision is a nature park with flowers and trees!

At the time when the park opened, other similar places usually set up rides such as roller coasters or Ferris wheels. Island Park only had plants, so some visitors voiced their disappointment that “there’s nothing to see.” However, the founder would not abandon the idea to forgo amusement rides, maintain the natural scenery as much as possible, and make the park infinitely distant from an artificial construct. 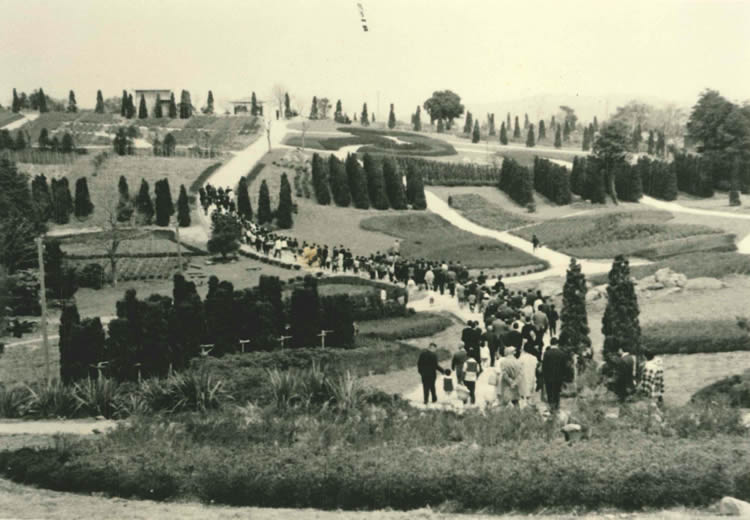 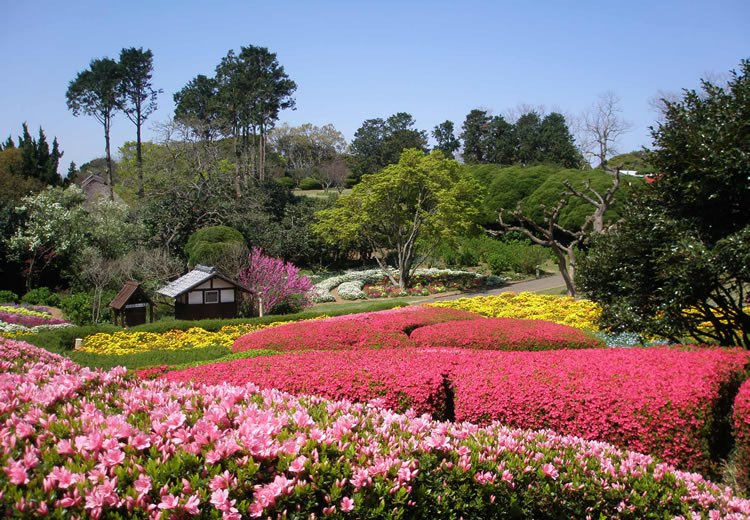 Let the children run around to their heart’s content, let families eat their boxed lunches together and may everyone spend time at their own pace, surrounded by nature.

It made Kosaku happy to see visitors enjoying themselves, whether it was a father rolling around on the grass in his sleep or children playing joyfully. He thought to himself that it was not a mistake to pursue the dream that started when he was 19.
After developing the rough land, planting trees and sowing flowers, the newly constructed park became a beloved place where among nature many visitors could slow down and relax, a true nature park. 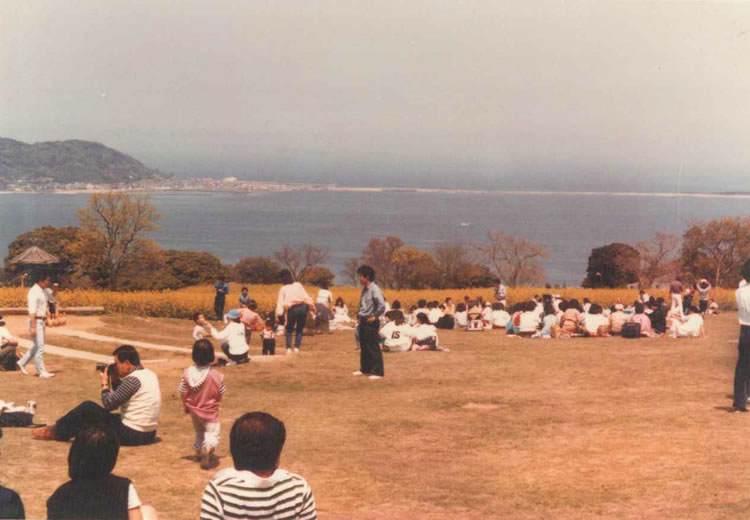 Relaxing on the grass. 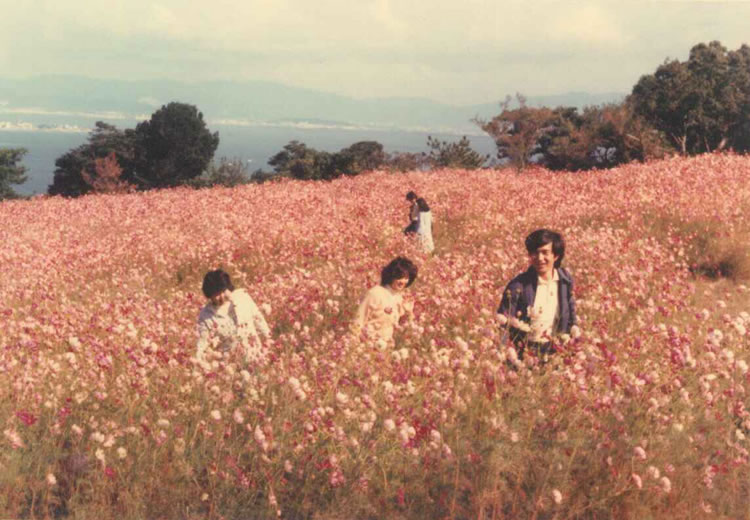 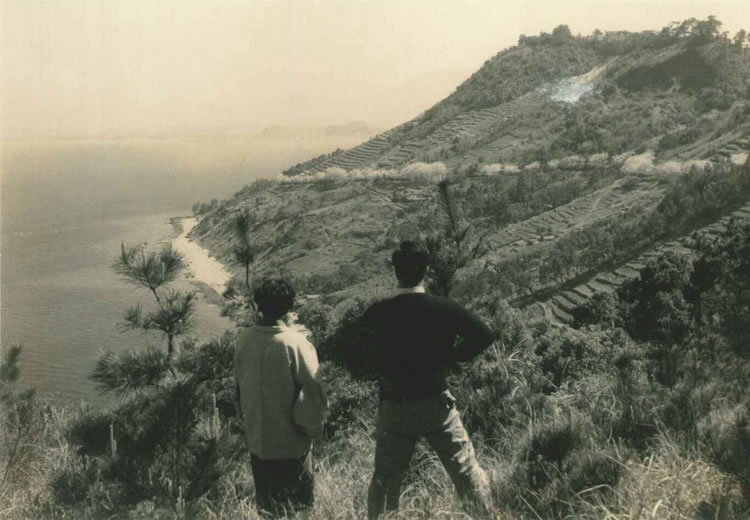 Kosaku and his wife, walking through live together, keeping faith in the dream. 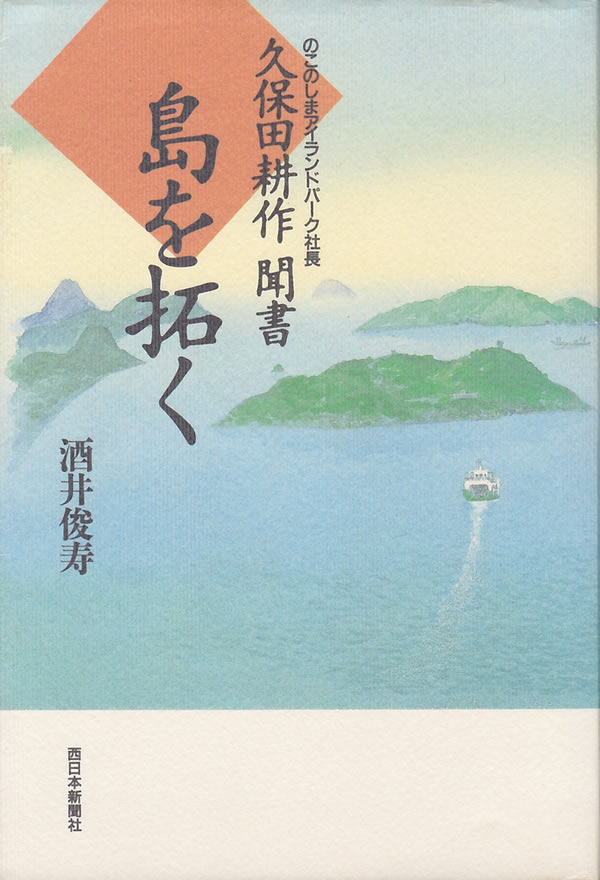 Nishinippon Newspaper Transcribed Memoirs Series
“Developing the Island”
by Kosaku Kubota
The changes on Nokonoshima leading to the creation of Island Park are described here in detail.
The book is sold at the entrance to the park. 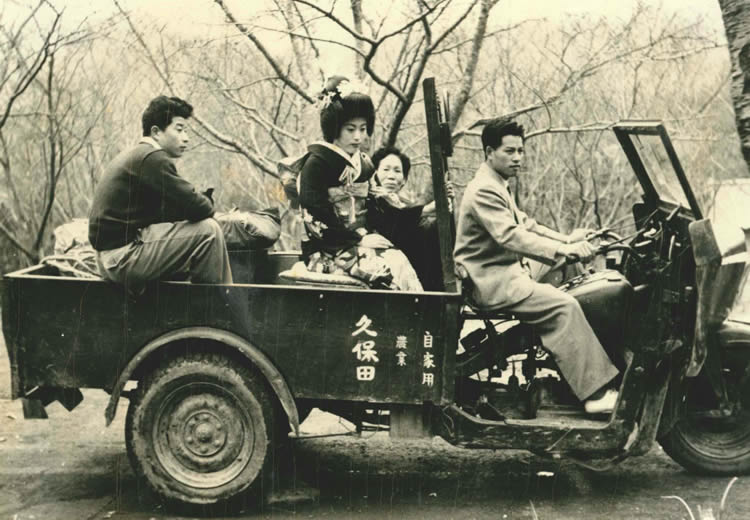 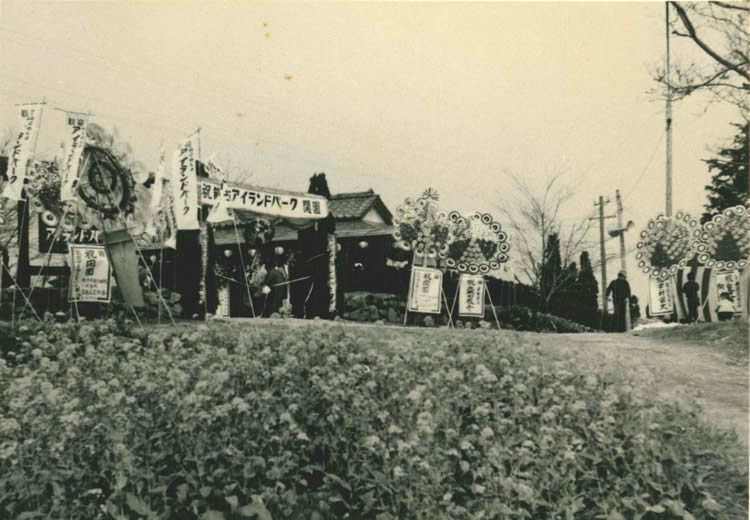 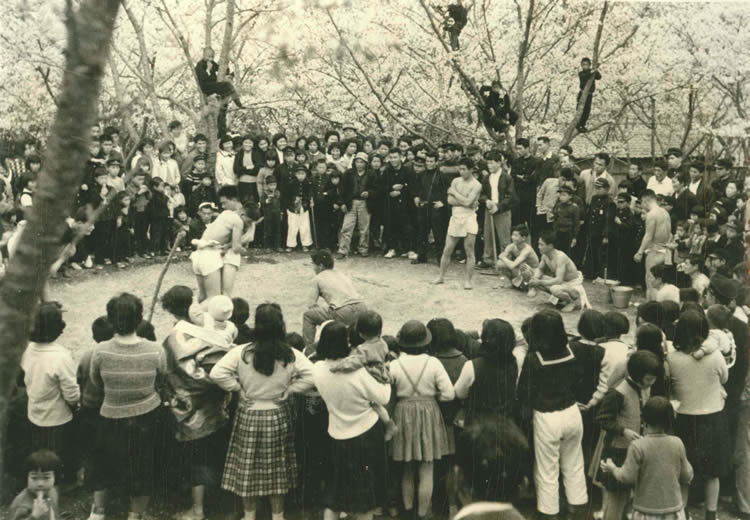 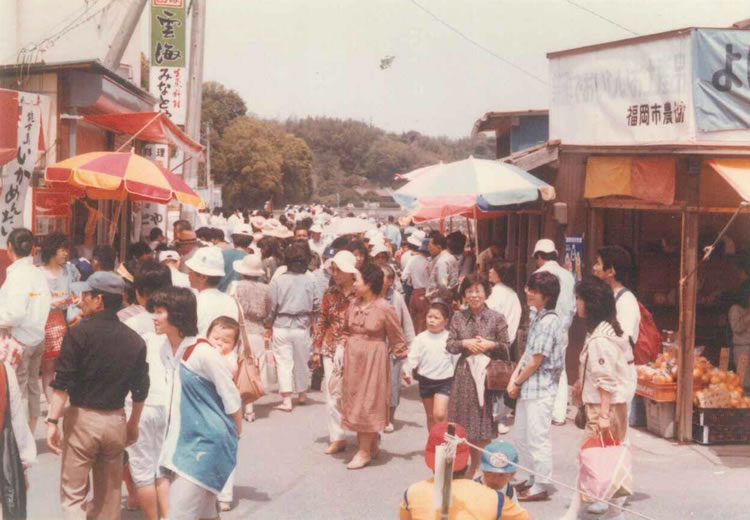 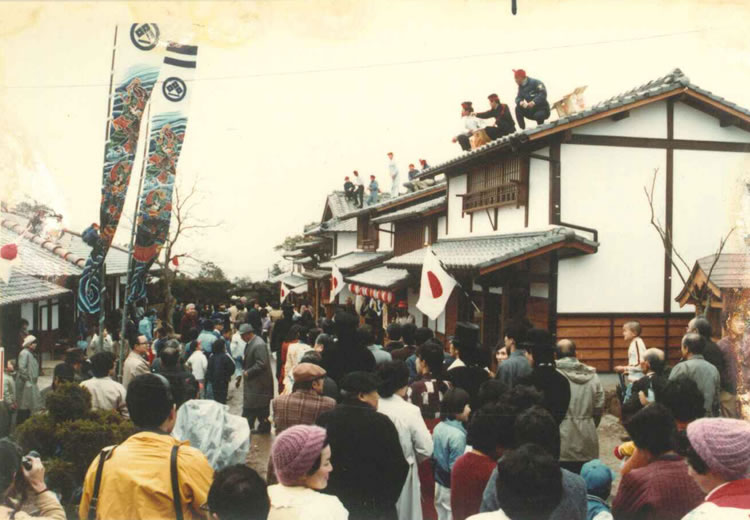 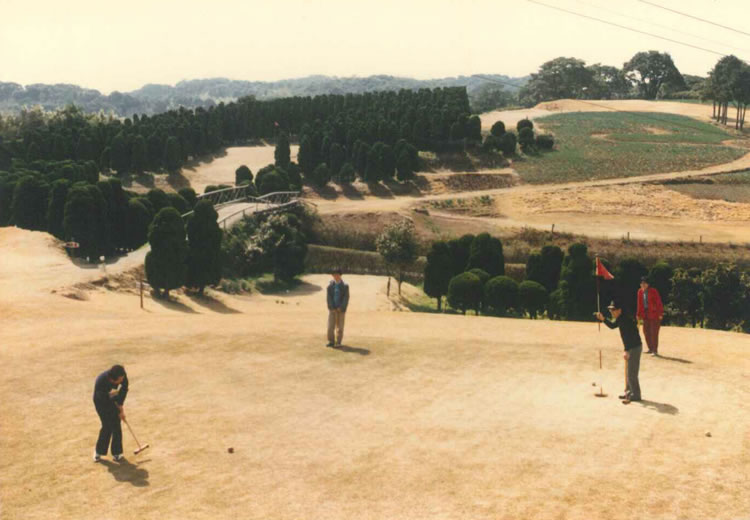 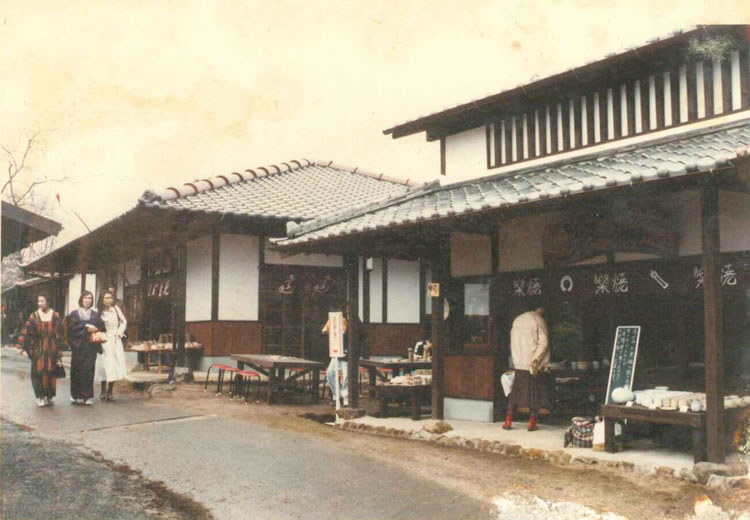 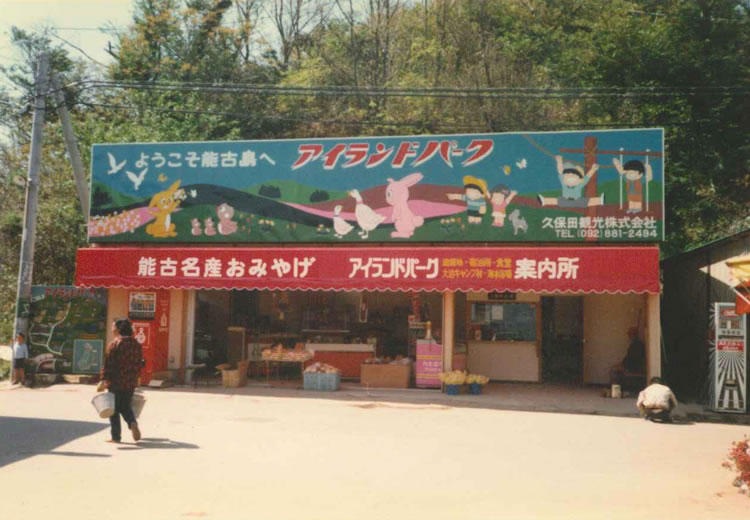 The story of Noko kannon and goddess Once upon a time, there are two kannon1 statues made of stone in a village called Nokomura2. The one is called “Otoko Kannon Sama3 (hereinafter Mr.Kannon)” and the other is called “Onna Kannon Sama4 (hereinafter Ms.Kannon).” Both...

Nokonoshima Island Park hosted Kyushu's first so-called "legal wedding," in which newlyweds from abroad can register their marriage in a Japanese public office. During the wonderful ceremony vows were exchanged on a field of sunflowers in full bloom. May the married...